“Our heating and CO2 technology must be reliable”

Great Northern Hydroponics from Canada is a mid-sized high-tech horticultural company with ambition. Within the existing 28-hectare (approx. 69 acres) complex, which is mainly designed for tomato cultivation, a part is allocated to raising young plants and producing strawberries, the first crop of which has now been set up. A new greenhouse for tomatoes will be built in 2022. “In both crops there is still a lot of growth potential that we’d like to take advantage of,” says President Guido van het Hof.

The nursery, based in Kingsville, Ontario, is located in an important agricultural center for both the Canadian home market and the northeastern United States. It is part of Soave Enterprises, based in nearby Detroit (USA), which will be investing heavily in its agricultural branch in the coming years.

“Over the short term, we want to keep tomato cultivation at the current level, and expand strawberry cultivation, which we began this year. We have been and will be converting some of the existing greenhouses for this. Because of this new crop, we are also expanding the area for raising young plants from 2 to 5 hectares (from approx. 5 to 12 acres). The new greenhouse that will be built next year is needed to maintain tomato production at our current level. After that, I expect it won’t be long before another expansion takes place.” Guido van het Hof’s words make it clear that significant restructuring and expansion is taking place. And it was needed, too, because the last expansion took place in 2011, and there is no question of market saturation for the time being.

At home in two worlds

After studying horticulture in the Netherlands, Van het Hof moved to the United States in 1996, where he worked for horticultural pioneer and American marketing innovator Johan van den Berg for four years. He then worked as a manager for Pieter van Gog in the Netherlands for two years. “My wife is an American, and she wanted to go back to an English-speaking country. I learned through my network that Great Northern was looking for a grower, so Canada it was. We all feel very much at home here.”

In the 18 years that Van het Hof has been in Kingsville, he has worked his way up from grower to business manager and general manager. He gave shape to the expansion and modernization of the company, which has impressive facilities. With sister company Soave Cogeneration, they created Ontario's first cogeneration park. This features four gas-fired CHP units, providing 12 MWe.

“We use the heat, CO2 and a portion of the electricity generated ourselves, and the rest of the electricity goes through the net to 15,000 households in the area,” he explains. “Eight hectares (almost 20 acres) of the premises is equipped with hybrid light installations, so that we are in production all year round.”

After cleaning and condensation, the flue gases from the CHP units are used for CO2 dosing in the greenhouses. Van het Hof is very pleased with the flue gas condensers produced by Van Dijk Heating (VDH) behind the traditional boilers, which excel in reliability and efficiency, he says. In the condenser, the flue gas cools down to below the dew point. The heat released is reused, increasing the efficiency of the total heating system. The cleaned, cooled and CO2-rich mixture is distributed very precisely over the various cultivation areas via a central manifold and ten CO2 dosing units – also produced by VDH.

According to Van het Hof, Great Northern Hydroponics was the first horticultural company in Ontario to completely recirculate drain water. In order to disinfect the recycled water, an Ecoster unit with a capacity of 40 m3/h was purchased from Van Dijk Heating in the Netherlands. There are now three disinfectors with a combined capacity of 100 m3/h. That’s more than enough to also treat the drain water of the new greenhouse that will be built. “We have had larger heat exchangers installed so that the treated water is cooled down quickly. We utilize the heat emitted for cultivation, of course.”

Van het Hof and investor Soave see a bright future for Great Northern Hydroponics. We cultivate very efficiently and sustainably according to the principles of Plant Empowerment. The company has been working on the sale and distribution of tomatoes for several years with the listed company Village Farms. They are currently setting up their own sales organization for strawberries.

“There is still plenty of market potential that we’d like to take advantage of,” summarizes the Dutchman working in Canada. “With Soave Enterprises as a dedicated shareholder and financier, we can move forward with this. This also requires reliable suppliers, such as Van Dijk Heating. Our heating and CO2 technology must be reliable, otherwise we cannot fulfill our contracts. Van Dijk has been a household name in the Netherlands for almost 50 years. Here, too, the team has been able to deliver on its promises time and time again. That’s impressive.” 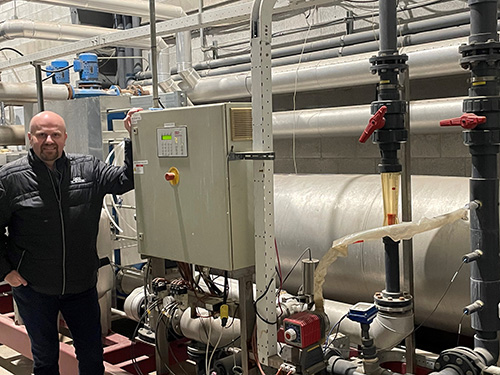 Guido van het Hof is very pleased with the flue gas condensers and CO2 units from Van Dijk Heating. “Here, too, the team has been able to deliver on its promises time and time again. That’s impressive.”