‘AVS works fantastically in this climate’

In 2016, Canadian vegetable producer Nature Fresh Farms established a production site in its most important market, the United States. In Delta, Ohio, the company now grows tomatoes year-round in 18 ha (44.5 acres) of greenhouses, partly under artificial light. The AVS air handling system from Van Dijk heating plays a key role in controlling the climate – a challenging task due to the extreme seasonal influences. Crop manager Octavio Perez Rodriguez wouldn’t want to be without it.

Octavio Perez Rodriguez is an old hand at tomato growing. He started his career at a low-tech nursery in Mexico. From 2008 onwards, he managed high-tech crops in different parts of the US. Now he works for Nature Fresh Farms in Ohio, where temperate summers and harsh winters determine the rhythm. The differences between daytime and night-time temperatures can also often be substantial.

In circumstances like these, it is not easy to cultivate tomatoes of a consistently high quality in an efficient, sustainable way. But that is exactly what Octavio has succeeded in doing here for the third year running. “It’s a challenging job, but with the right tools you can cultivate crops very well here,” he says. “I grew tomatoes in a semi-closed greenhouse with advanced air handling in California, and I managed 17 ha (42 acres) of artificially lit crops in Maine for a couple of years. That wide range experience came in handy when I came to work here in 2018.”

Octavio has since discovered that AVS (Active Ventilation System) gives him precisely the toolkit he needs to control the climate in an energy-efficient way, regardless of the season. The AVS unit has a mixer valve that sucks in outdoor and/or indoor air and blows it into the greenhouse through plastic hoses under the growing gutters via a central heating block. The relatively dry outdoor air lowers the moisture content of the air inside the greenhouse and the central heating block efficiently raises the air mixture to the desired intake temperature.

“I was very cautious for the first few months, but I soon realized that I could push the boundaries with this system,” says the Mexican. “The combination of dry intake air and continuous air circulation creates a growing climate in which the plants transpire and grow more actively. That also allows you to make better use of other systems, such as grow light and screens. I found that out straight away in my first winter, which was very harsh.”

Octavio was urged by various people to exercise caution, since the system could freeze at temperatures below -20°C (-4°F). “According to my colleagues, it would be risky to bring in outdoor air,” he says. “But Joek van der Zeeuw of Van Dijk Heating told me that a customer in Alberta, Canada, was running the system at a lower capacity at -24°C (-11°F) without any problems. And that has been my experience now too. As soon as circumstances permit, I would like to visit that grower to compare notes.”

Control based on HD

To achieve an active growing climate, Octavio aims for a humidity deficit of 6-10 g/m3. This means that an extra 6 to 10 grams of water can be added to a kilogram of air (via crop transpiration) before the saturation point is reached. With a ventilation capacity of 10.6 m3/m2*h, the AVS system is quite capable of handling that.

“This system specially helps in the last 6 hours of the photoperiod, creating conditions that you can not replicate in other parts of the day”, Octavio explains. During this last six hours you get high CO2 levels, constant and steady supply of light, optimal temperature for photosynthesis and of course optimal HD. “This keeps the plants transpiring easily, and by controlling the climate we have greatly reduced the disease pressure”, the crop manager continues. “We no longer get Botrytis or mildew, like we did in my first year. Additionally, because the air is moving, the climate is much more homogeneous. That also boosts plant health and reduces damage from pests and diseases. The number of treatments to control fungal diseases has dropped considerably due to a better climate on the lower canopy and reduced the negative impact of those chemicals applications over the past 2½ years, and yet we have less damage and are producing more than in the first season.”

According to the crop manager, the AVS units make it easier to create and maintain optimal growing conditions, so he uses the ventilation windows much less now. The greenhouse retains more heat and CO2, and the energy screen can be left closed for longer. Growing this way therefore uses less energy than growing without a comparable air handling system. “So far, we have seen production rise for two seasons in a row, and that seems to be happening again this year. For me, it’s obviously down to the active ventilation, which we have been using more and more effectively. It works fantastically in this climate. So I don’t mind if this winter is a harsh one – because that’s when you get the most out of your AVS.” 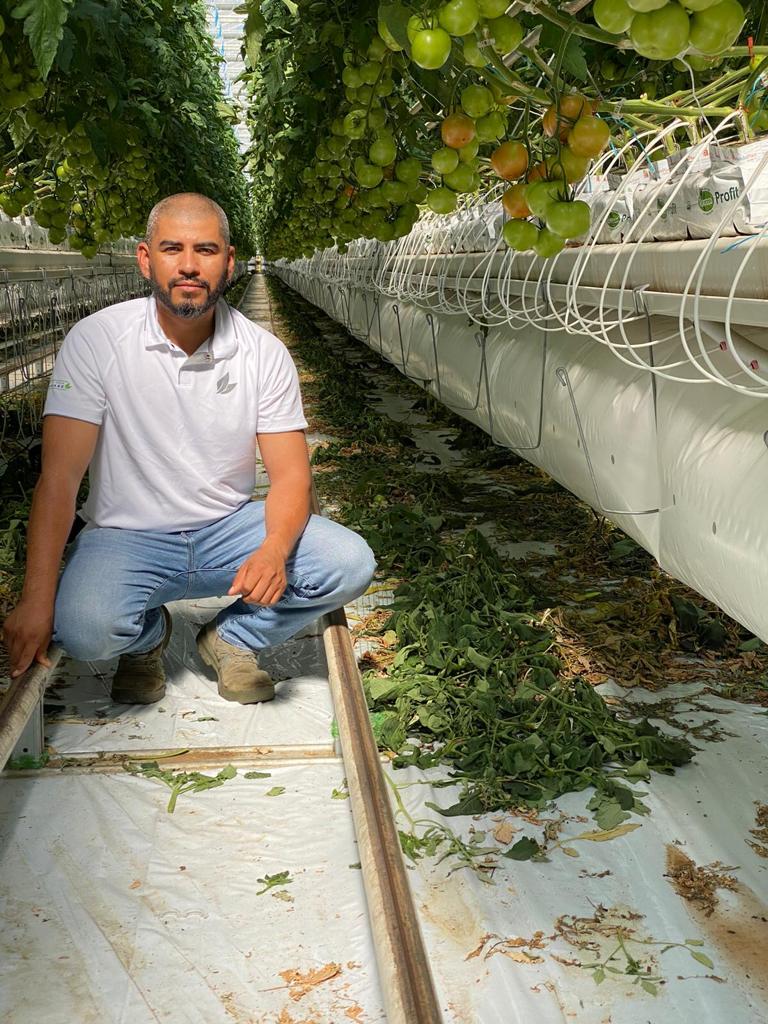 Octavio among his tomatoes, which deliver top performance thanks to the optimized growing climate and lower disease pressure.